Message: Only variable references should be returned by reference

Message: Only variables should be assigned by reference

birth of the Fiore Sardo.

With reference to cheese produced in Sardinia (Italy), Diodorus Siculus, in 59 BC, states that “the Ionians moved away from their conquerors and hid in the mountains, excavating for themselves underground habitations. They now breed livestock, and thus dairy and meat products provide the major part of their diet.” Palladius Rutilius Taurus, Latin author of C4th, described the cheese-making process in Sardinia at length: enzymes used for curdling were taken from both lambs and kids and from the sap of fig leaves and wild artichoke flowers (as certain fresh cheeses in Mediterranean countries are still made today).

The Barbagia of Ollolai in the fifth and sixth centuries centred around the River Taloro Valley. For  winter grazing, the herds removed to the region later known as Parte Barigadu and Ocier Reale (present-day Ghilarza) and, despite the obstacles set up around the mountains by local rulers to stop the sheep-farmers’ incursions, the area of pastureland available to the herds was enormous: Quirra Drop, Mountains of Alà, Bruncuspina and Mount St Victoria.

During this period, the economic activity of the people consisted above all in cheesemaking, particularly the ewe’s variety, produced in cork containers or hollowed-out oak blocks. Here, “the liquid of milking” was poured, then heated red-hot in bowls and the enzyme added. Once coagulated, the curd was transferred into hardwood vases or perforated moulds and placed inside a vat containing brine. It was ripened on wooden or wickerwork trellises (“sa cannizza”). After the millennium, production became intense, since cheese was used as a means of payment.

In the Middle Ages, Oristano was undoubtedly the centre of the cheese trade. The sheep of Mandrolisai and the Barbagia (“imberciadori”) “flocked” there even at this time, though other ports, such as Cagliari, Alghero and Bosa were also popular. From the beginning of the C12th century, Sardinia attracted Genovese and Pisan merchants, as numerous food products, such as cereals and cheeses, which the markets on the mainland demanded, could be obtained there cheaply. These traders settled in the judicate of Arborea, the richest and most fertile terrain for cultivating many products, and were considered as good businessmen. The judges, as a symbol of generosity and hospitality, would offer the Genovese “casu and aione de benedicere” - individual cheeses big enough to be transported by ox-drawn cart, and a lamb as a blessing.

Towards the end of the C12th, Cagliari became the trade and exportation centre of all kinds of commercial products, from salt to wool, cheese to cereals.

From the various contracts, of trade, exchange, vessel leasing and rental drawn up by lawyers in Genoa, the ports of the Ligurian Riviera and Bonifacio (which assumed the role of intermediary stage between the mainland and the whole of northern Sardinia after its foundation in 1195), one can deduce that the most widely exported goods from northern Sardinia were grain, barley, wool, leather items and cheese. A century later, in 1294, the Pisan and Genovese ships operating in Sardinia were mainly laden with cereals, meat and cheese. In 1299, according to Pisan documents, the “St Anthony”, a single-decked ship rented out for Pisa  by a “patron” of Barcelona to a certain citizen of Sarzana in Liguria, left the port of Cagliari. The bulk of the cargo was made up of “Sardinian cheese” equivalent to 235 hundredweight. Significantly, in 1329, the principal economic resource for Sardinian towns was profit from customs charges; their relative affluence was due to the intense commercial traffic with Naples, Pisa, Genoa, Venice, Ancona, Sicily and itinerant Berber Jews. In the same year the main exports were wine, leather goods, cured meats, oil, corn and cheese . “The rate for red wine (called “Latin wine” on the price list) was fixed at one denarus per barrel; for white wine (termed “Greek wine”), two denari; for a quintal of cheese four denari.”

On 17th December 1330 a Genovese ship, hired by Pisan merchants resident on the island, departed from Cagliari with 650 “Sardinian-style” salted cheeses.

After 1341 there were frequent trade exchanges between Sardinia and the Balearic Islands. For example, twenty years later, in the Aragonese archives, the following permit is issued: “1361 April 21st, Majorca. The Governor licenses Sancho Sanchiz of Valencia to take six quintals of Sardinian cheese from the island and transport them to Valencia.” (Pablo Cateura Bennasser). The cheese was quoted at the rate of 42.3 g of silver per quintal in 1332; 41 g in 1356, but only 26.5 g in 1463 (around 1503-05, in the north, the price in silver of a quintal cheese varies between 19.4-34 g). A full description of the organisation of the cheese-trade in the C14th, containing diplomas and maps from the Diplomatic Code of Sardinia can be found in the works of Tola.

In 1567, a Sardinian viceroy boasted of having offered local cheeses regularly and extensively on  the international market: “Many cheeses from Alvernia, Milan, Parma and especially Sardinian cheeses, which filled entire galleons and were exported to Spain and Italy .” (Braudel).

In 1776 Francesco Gemelli relates that there was an abundance of cheese on the island and that it was sold commercially: “they were dried on wickerwork material in the upper part of the pen and heated over the fire. In this way, they absorbed the smell of the smoke, which was not disliked by the Romans”.

Correspondence in 1789 from the French Consul Guys states that the exportation of cheese took place in significant quantities. “The product was made in three different varieties: the cheese made in brine was widely exported to Leghorn, Naples and Marseille, whereas big cities such as Genoa and Nice preferred the sweeter and more delicate types. However, major difficulties obstructed free trade. For instance, the cheese-producer who intended to export had to pass through such a difficult and complex bureaucratic system that, often, he was forced to give up the sale or find a way to smuggle the cheese” (see Carlino Sole).

Bogino, at the end of C18th, thought that he could persuade Sardinia to abandon manufacture of the traditional savoury cheese and mass-produce sweet cheeses instead, such as the Dutch and Lombardy varieties (di Tucci). However, sheep-farmers found that making their cheese salty was generally less difficult, sale at a good price was more certain, and there was less risk involved in keeping it, since sweet and fine cheeses were prone to deterioration, especially in Sardinia. Moreover, salty cheese resisted the heat, kept its weight and was clearly exportable, as proved by its popular reception on the consumer market. Sardinia, therefore, had nothing to fear from Dutch and Northern Italian cheeses on the port markets of Barcelona, Marseilles, Nice, Alassio, Genoa, Leghorn, Civitavecchia and Naples.

The savoury cheese continued to be available mainly in Cagliari, since it cost a third less than in Bosa or Porto Torres and over 50% less than in other ports. This was because Cagliari, uniquely, had large pools of brine in which the cheese could be stored risk-free until the time arrived for loading.

La Marmorain, commenting on his voyage to Sardinia in 1839, suggests that the plentiful production of cheese was due to the enormous number of sheep. Nonetheless, he notes that output was falling daily, since sheep-farmers were increasingly tending to switch to crop-growing. Much of the cheese previously exported went to Naples, where “the people liked them to serve with their macaroni, though they were no longer allowed because of a new regulation, which amounted to a prohibition”.

Under the entry for Gavoi in the dictionary of G Casalis, produced by Vittorio Angius in 1829, we discover a village population of around 1400 inhabitants, with 70 sheep-farming and 90 cereal-growing families. The article goes on to speak of “the large-sized cheeses produced in great quantities in the Gavoi area [which are] very highly esteemed. Time permitting, 1700 “cantara” [680 quintals] can be manufactured”. As with other villages in the Barbagia, the cheese was sold in Orosei.

In 1885 Francesco Salaris records recent annual production figures: “The quantity of cheese made in the surrounding area (Nuoro) is significant. In 1876, the sheep and goats’ varieties reached the figure of 6780 quintals.” He describes the production process and explains that “regions where the extraordinary goodness of the pastures, made up of vast, almost exclusively natural, areas of highly-perfumed grasslands, favour the correct production of milk. [Thus,] however primitive the production process may be…..nonetheless they have a name and are sought after all over the island. These are the cheeses of Gavoi and Fonni.” On the utensils used in cheesemaking, he observes that “the peforated wooden bowl which gives the cheese the form of two truncated cones united at the base, is of peculiar nature. There are several diameters of bowls: 15, 20 and 25 centimetres, sometimes greater. Concerning the preservation of farm products: “Shepherds salt the cheese, which they then take to sell in Orosei if there is demand for it in Naples; otherwise they keep for local retail, which is more problematic, but also more profitable.”  “…Cheeses are exported to Naples…”

This is the “Sardinian Flower”. The characteristics specified refer unmistakably to the cheese known today as Pecorino Fiore Sardo. The name very probably originates in the fact that, until recently, perforated chestnut wood “pischeddas” moulds, also made of oak or wild pear, were employed in the production process. A flower, perhaps a lily or asphodel, was sculpted on their base, leaving a distinctive imprint on the cheese, often including  the manufacturer’s initials. In the Thirties, a well-known company launched a new type of aluminium mould, perfectly suited to the making of Fiore Sardo, with concentric lines at the sides and “Fiore Sardo” engraved on the bottom. “Such moulds, able to hold 2-3 kg, often have the disadvantage of impressing relief decorations on the cheese, which prevent complete cleaning of its surface during maturation. It would, therefore, be more practical to put them back on sale perfectly smooth”. (Peppino Scarpa, 1934).  Today stainless steel “pischeddas” moulds are used.

This brief history demonstrates how the essential procedures involved in the production of “Fiore Sardo” cheese have remained the same for thousands of years. 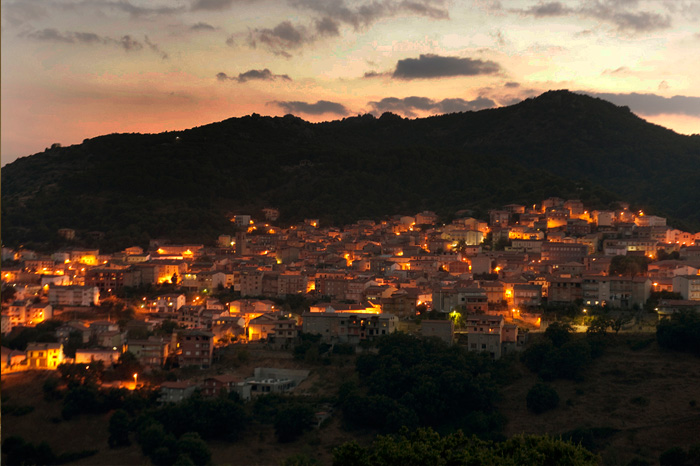 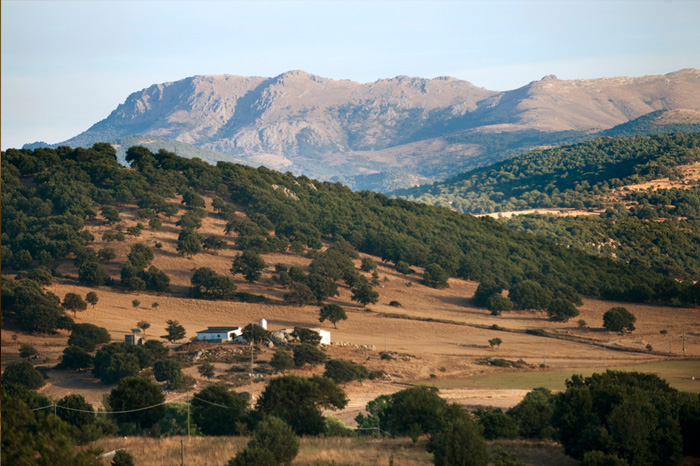